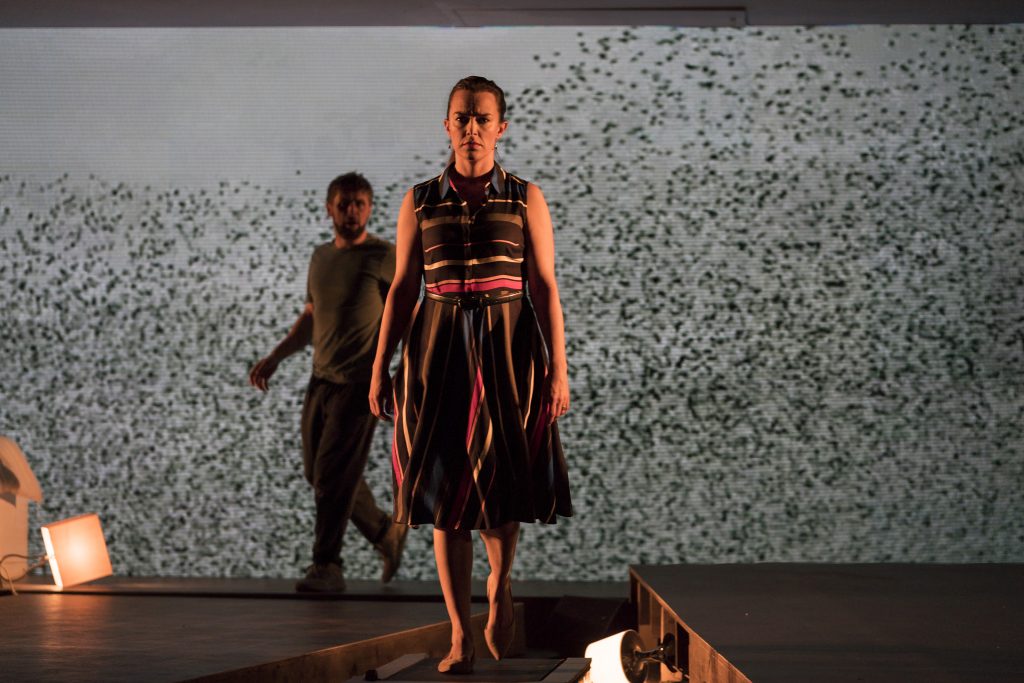 Following 2015’s The Last Hotel, The Second Violinist is Enda Walsh’s second opera, but here — through the brilliant use of set design and mixed media — he has bent the form to his will. Once again, the show — a production from Landmark Productions and Wide Open Opera — is a collaboration with Donnacha Dennehy, whose splendid and fraught compositions court Renaissance harmonies, while perched on the very edge of dissonance.

In doing so, they mirror the mental state of the show’s protagonist, a morbid and unhinged orchestral violinist whose life has come off the rails.

As he did in The Last Hotel, Walsh affectionately subverts the high-strung theatrics of opera by having his frustrated, middle-class characters sing in a high register about their tragic, nightmarish desire for a mundane, Ikea snapshot of life.

In The Last Hotel, it was house extensions.

In The Second Violinist, it’s swank interiors. This bland, fake, and soporific “real” world is complicated by a second, more disturbing “virtual” world, however, in which the violinist’s fondness for video games, and all measure of online distractions, scrapes away at all the cosiness.

In a daring move, the show runs a number of timelines simultaneously. We observe the violinist (Aaron Monaghan) in the present, as he negotiates a life (and a mind) that has come undone, and we observe also the final days of his marriage, which are performed around him by Máire Flavin, Sharon Carty, and Benedict Nelson, the latter his own doppelganger (in baritone).

All of the performances are perfectly judged, as are the vivid interventions of a chorus, who deliver ominous sermons on love and also one absolutely killer ‘party’ scene.

The show’s resolution may be a little too rounded, but it cannot diminish such a stimulating and provocative thrill-ride.

Written by Padraic Killeen for the Irish Examiner 29.07.17