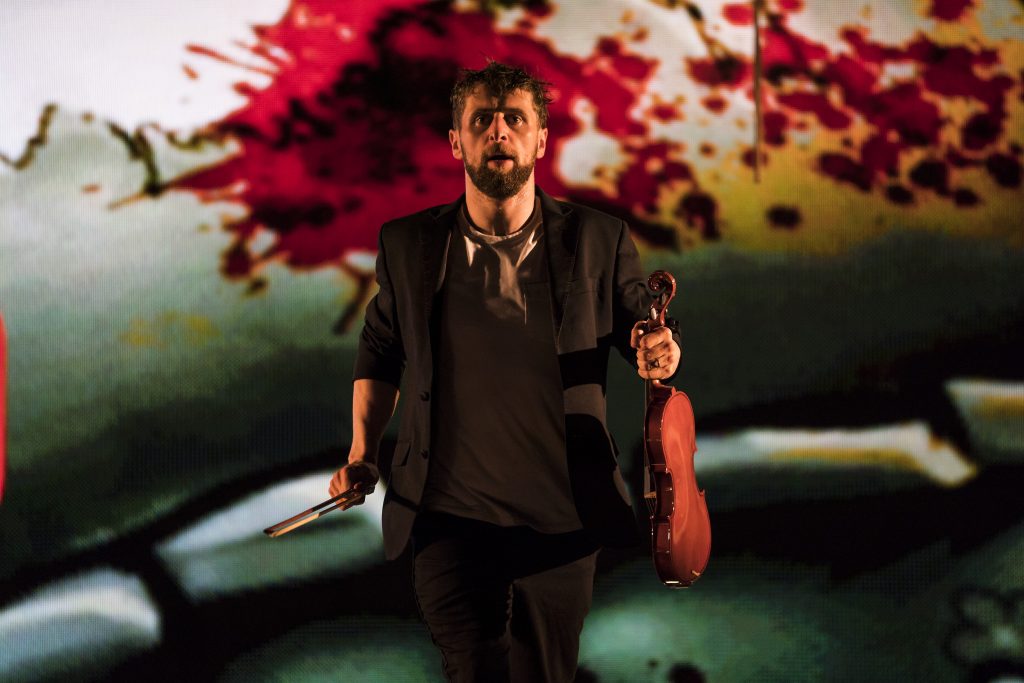 Motivated partly by mischief, actor Rory Nolan began asking an interesting question recently of one of his frequent collaborators: “What’s the best work you’ve ever done?”

Quietly spoken, thoughtful and unaffectedly modest, Aaron Monaghan seems like one of the least likely people to give him an answer.

“If I’m being really honest, I wouldn’t be able to mention a single show,” he says, furrowing his brow in the foyer of the National Theatre in London, on a clammy summer morning.

To anyone following Monaghan’s career, which took off as soon as he graduated from the Trinity College acting programme in 2002, it might seem that there are too many to choose from.

His long association with the Abbey began with an award-nominated turn in 2003’s She Stoops to Conquer. The following year he founded the touring theatre company Livin’ Dred, with Padraic McIntyre and Mary Hanley, in his hometown of Cavan.

In 2005, he brought his coiled athleticism to the part of Christy Mahon in Druid’s Playboy of the Western World, propelling him through the epic six-play cycle of DruidSynge. (One of the most delightful sights in Irish theatre is still a backstage moment, caught on camera, during that first full cycle, when a young Monaghan finishes his several performances, scrunches his frame until it looks like a clenched fist, and shakes silently with achievement.)

He has been a de facto and then official member of Druid’s ensemble ever since, through the world-conquering original production of Enda Walsh’s The Walworth Farce, and the international tour of Walsh’s Penelope, a revival of Martin McDonagh’s The Cripple of Inishmaan that earned him a coveted Obie Award, still more tests in DruidMurphy (Best Supporting Actor) and DruidShakespeare, and, most recently, the hugely acclaimed Waiting for Godot.

Monaghan is, he admits, neurotically unable to take a compliment. “If I started believing that,” he tells me sincerely, “God knows what kind of a monster I could create.”

We are meeting, however, to discuss exactly what kind of monster Monaghan is currently creating. In Enda Walsh’s The Second Violinist, a new collaboration with composer Donnacha Dennehy, Monaghan plays a character who might strike you as his inverse image: a performer who is falling apart.

In a Landmark Productions and Wide Open Opera co-production, Martin is a musician, recently and catastrophically single, living an unhealthy life, professionally slovenly, socially discourteous, and buffeted between automated voices, violent video games and ever-darkening fantasies. How does Monaghan relate?

“Everyone looks at their life in some ways and thinks that it’s probably crumbling around them, even if it’s not. Especially as a performer; you’re always struggling to get something right.

It’s not a small point. Monaghan’s philosophy is one of relentless improvement, something he discusses frequently with his fellow Druid actors. “I think every actor, or every performer, feels that no matter how good they are, they want to get better.”

The question is how. On stage, Monaghan does not believe in doing anything the same way twice. As an audience gathers for an early matinee, one older woman clutches her tea cup as Monaghan lifts his arms in a fighter’s stance. “It’s like sparring,” he says. “You’re working off another actor, depending on how they give their line, or the atmosphere in the room. Obviously, you stick to the rules. But within that there is a huge amount of movement. Otherwise I just feel it’s very dead.”

In that respect, The Second Violinist may be a worthy challenger. Although he moves through a Dublin context – unsually specific and real for Walsh – Monaghan’s role in the text – “The libretto, I have to keep calling it” – is entirely silent.

As his circumstances gradually become more apparent, in both banal and grimy detail, while the majesty of the natural world appears as a murmuration of swallows on his phone screen, an opera of lascivious detail blooms around him. Is he a watcher or participant? Can digital slaves escape into high art, or does our reality merely play second fiddle?

In rehearsals with Walsh, who is directing, Monaghan has been feeling for his place within the music. In a notebook he keeps, his first response was to call it “a play in which an opera occurs.”

In rehearsals, though, distinctions are less clear: both he and opera singers Máire Flavin, Sharon Carty and Benedict Nelson work with Walsh and a conductor, negotiating a tricky score, a barrage of projected text, and a story that slips between the concrete and the abstract.

“Enda is so good at this, that somewhere along the way we stop asking those questions,” he says. “These worlds converge very naturally I think.” Like that murmuration, it all comes together somehow.

Monaghan’s preferred metaphor for his art, a little surprisingly, is something much more aggressive. (His tea cup-rattling reference to sparring was not accidental.)

Following DruidMurphy in 2012, which, when pressed, he will offer up as the work of which he is most proud, Monaghan fell into an unusual state of apathy, perturbed that nothing would ever again occupy him so fully. “I think I went into as close to a depression, as you could’ve done,” he says. “Yeah. For about two years.”

He considered alternatives to acting – he could be perfectly happy in an office or a warehouse, he thought – until his then girlfriend, and now his wife, actor Clare Monnelly, reasoned with him that he was actually unqualified for either. “So I’m kind of going, I’m f**king stuck with this.”

With her encouragement, he began to draw from his own skills, moving towards directing, writing, teaching and working with amateur groups. (A recurring joke in The Second Violinist has Martin stalked by an am dram musical version of An Ideal Husband.) And somehow, at the same time, Monaghan became fascinated with mixed martial arts (MMA).

“I think it’s the most vicious sport in the world,” he says, “but I see a huge amount of training involved with it, the hard work that you have to do. They close that cage and it is just you.”

It reminds him of Goethe’s appreciation for an actor’s discipline: “I wish the stage were as narrow as the wire of a tightrope dancer, so that no incompetent would dare step upon it.” Perhaps if Goethe had ever taken a shine to Conor McGregor, he might have adapted that maxim to include the finer points of a locked cage and a left hook.

For his part, Monaghan is engrossed by McGregor, for both his confidence and his competency. “He’s one of the first young Irishmen to go, I’m really f**king good at what I do, and I’m going to show you. And that manifests himself . . . There’s something innately Irish about humility, but Jesus Christ, it’s held us back in so many ways.”

That proud performance of unapologetic ambition might be a figure closer to Monaghan’s alter-ego than the hapless Martin. He now frequently refers to performance as “stepping into the ring”, something his colleague Marty Rea, who toured the world with him this year for six months, has grappled with.

“But nobody wins at the end of the day?” is Rea’s counter. Even his work as dramaturg and director with Monnelly on her recent, lauded solo work Charlie’s A Clepto, at the earliest stage of their marriage, can sound punishing. (“At that point, I don’t think she hated me, but . . . ”)

And it doesn’t seem entirely incidental that when Monaghan reverses Rory Nolan’s question, he doesn’t consider any of Nolan’s widely-celebrated comic roles as his finest work, but his stuttering brawler Iggy, in Tom Murphy’s A Whistle in the Dark. (Nolan hates this answer.)

Monaghan, mercifully, has not become more bullish – he’s as gentle a soul as you’ll ever meet – but the inspiration has proven remarkably useful. Recently, he found a new way to politely take a compliment without having to hide his drive for improvement.