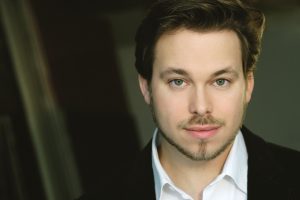 Ryan McAdams has been recognized as one of the exciting and versatile conductors of his generation. He made a highly successful subscription European debut with the orchestra of the Maggio Musicale in Florence, where he has since returned regularly. His Eastern European debut was made with the Academy of St. Martin in the Fields, Julian Rachlin, and Mischa Maisky. His subscription debut with the Israel Philharmonic was hailed as “extraordinary,” “masterful,” and “immense[ly] dramatic” by the Jerusalem Post; a live recording of the concert was released by the IPO on the Helicon Classics label. He has returned to the Israel Philharmonic twice since, most recently in a series of performances featuring cellist Alisa Weilerstein and Orff’s Carmina Burana. A Fulbright scholar, he previously served as Apprentice Conductor of the Royal Stockholm Philharmonic, assisting then-Chief Conductor Alan Gilbert. Mr. McAdams is the first-ever recipient of the Sir Georg Solti Emerging Conductor Award.

In the current season, Mo. McAdams conducts Le nozze di Figaro with Lyric Opera of Kansas City and Carmen at the Maggio Musicale, and leads concerts with the Phoenix Symphony, National Symphony in Washington D.C., Louisiana Philharmonic, Eugene Symphony and the Orchestra Sinfonica Nazionale della RAI in Aix-les-bains, France, Torino and Piacenza. He conducts a Gala concert in Beijing with the China National Opera, a contemporary music festival with Bang on a Can and the Wordless Music Orchestra in Athens, and sees performances in Ireland with the Galway International Arts Festival and the Dublin Theatre Festival. Last season, Ryan McAdams conducted The Pearl Fishers with Maggio Musicale Fiorentino, The Barber of Seville with Opera Theatre of St. Louis, Britten’s Owen Wingrave with Opéra national de Lorraine, and returned to Teatro Regio di Torino for performances of Carmen, as well as orchestral concerts with the Phoenix Symphony and Wynton Marsalis, the RTÉ National Symphony, and Santa Fe Symphony.