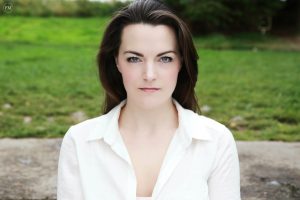 With an engaging presence and delightful charisma Dublin-born soprano Máire Flavin represented Ireland at the BBC Cardiff Singer of the World competition, where she was a finalist in the Song Prize.

Ms. Flavin recently made her role and company debut as Fiordiligi in Così fan tutte with Opera North under the baton of Jac van Steen, for which she garnered high critical acclaim (“…the real discovery is the Irish soprano Máire Flavin, who is resplendent as Fiordiligi…..Flavin has a perfectly proportioned Mozartian voice, with a glittering upper register that suggests she may be the next singer ready to graduate to greater things.” – The Guardian; “…Flavin’s peachily sung Fiordiligi the pick of the bunch.” – The Times). Further engagements last season include the title role in Agrippina a co-production with Irish Youth Opera, Opera Northern Ireland, and association with the Irish Chamber Orchestra under the baton of Jonathan Cohen; and her role debut as Mimi in La bohème for Opera Theatre Company.

Current and future engagements include her role debut as Donna Anna in Don Giovanni for Opera Theatre Company; a return to Welsh National Opera and Scottish Opera; Hannah in the World Premiere of The Second Violinist with Landmark Productions and Wide Open Opera; Mimi in La bohème for Iford Arts; her role debut as Violetta in La Traviata; Hamilton Harty’s Children of Lir with the RTÉ Concert Orchestra; a return to the RTÉ National Symphony Orchestra for Viennese Gala Concerts; and her German concert debut in Vaughan Williams Sea Symphony with the Deutsche Philharmonie.