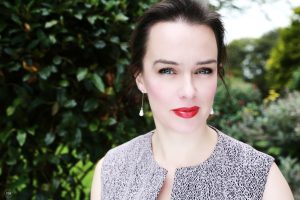 Winner of the inaugural RAAP/RTÉ Lyric FM Classical Breakthrough Music Bursary, Irish mezzo-soprano Sharon Carty is regularly praised for her musicality and intelligence, her integrity as an artist, as well as the warmth, clarity and agility of her voice. After initially having trained and worked for several years as a teacher of PE, English and Music, she subsequently studied at the RIAM Dublin, and at the University for Music and Performing Arts Vienna, before joining the Opera Studio at Oper Frankfurt from 2010-2012. She has been a regular guest artist at Oper Frankfurt, with recent roles including Aloes (L’etoile), Annina (Der Rosenkavalier), and the title role in Purcell’s Dido and Aeneas, a role debut which was lauded as “quite simply sensational” (Der Opernfreund).  January 2014 saw her create the title role of Oscar in the world premiere of Oscar und die Dame in Rosa at Theater Freiburg, described by the Stuttgarter Zeitung as a “young, agile, bright and round first-class Mezzo”.  She recently returned to Theater Freiburg to sing the roles of Medoro (in Handel’s Orlando) and Dorabella, as well as making company debuts as Ottone in Handel’s Agrippina (Irish Youth Opera), Hänsel in Hänsel und Gretel (Landestheater Linz) and Dorabella in Cosi fan tutte (Ministry of Operatic affairs, Belgium).

Equally at home on the concert platform, Sharon performs regularly with orchestras such as the RTÉ Concert Orchestra, Capella Istrapolitana, EUCO, Irish Baroque Orchestra, RTÉ National Symphony Orchestra and the Wiener Akademie. Recent highlights have included St.Matthew Passion and St.John Passion (J.S.Bach) with the RTE National Symphony Orchestra, Christmas Oratorio (J.S.Bach) at Osnabrück Cathedral, G.F.Handel’s Il trionfo del Tempo e del Disinganno and Ariodante  in Dublin with the Irish Baroque Orchestra, Opera Theatre Company, and conductors John Butt and Markellos Chryssicos, respectively, as well as Schubert recitals with pianist Jonathan Ware. She also presented a recital of baroque arias entitled Witches, bitches and britches, which she has curated herself as part of Music for Galway’s concert season in conjunction with the Galway Early Music Festival in May 2016, as well as chamber music recitals in Vienna with the Tonus renaissance brass ensemble, and of repertoire for piano, viola and mezzo-soprano in Dublin, Wicklow and Wexford with Musici Ireland. Plans for the 2016/2017 season included Dorabella in a new production of Cosi fan tutte at Theater Erfurt, Sesto in a new production of Giulio Cesare at Theater Freiburg as well as Messiah with the RTE National Symphony Orchestra of Ireland, Mozart’s Mass in c minor at Osnabrück Cathedral, St.Matthew Passion in Hamburg, and the Durufle Requiem with the Choir of King’s College Cambridge at the NCH Dublin. Current plans for 2017/2018 include creating the role of “Amy” in the world-premiere of Donnacha Dennehy’s and Enda Walsh’s new opera The Second Violinist, a tour of Handel’s Messiah and solo recitals with the Irish Baroque Orchestra, as well as her Russian concert debut with Musica Viva in Moscow, singing Hasse’s Marc’ Antonio e Cleopatra.

Recordings include Orfea Britannica with VUENV recorder consort and The stream in the valley, a CD of songs and duets by Michael Head, John Ireland and Benjamin Britten, released in 2014, with the support of Music Network’s Recording Scheme. In January 2017 she recorded the role of Minestra in the Gilbert & Cellier comic opera The Mountebanks with the BBC Concert Orchestra, conducted by John Andrews, for the Dutton label, the CD is due for release at the end of 2017. Also planned is the DVD release of “La Traviata” in concert with the NDR Radiophilharmonie Hannover, on the Naxos label.