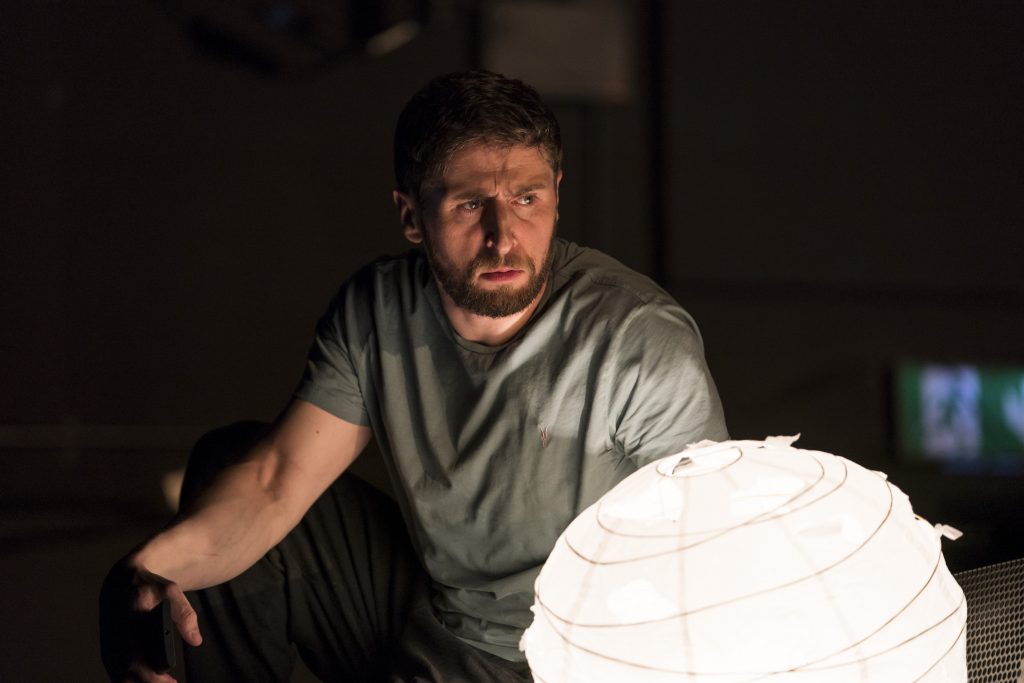 Early in composer Donnacha Dennehy and writer Enda Walsh’s second collaboration on an opera, for Landmark Productions and Wide Open Opera, we find its protagonist slumped on a sofa, busily reshaping his life.

His Tinder profile fills the wide rear digital screen of Jamie Vartan’s set, which rises from an orchestra pit to an uneven scatter of domestic and urban spaces, climbing higher still into an overhead forest landscape. On the screen, though, we watch an identity erased and redrafted, first from the overeager “Violinist in a musical ensemble!” next to the grandiose “Composer of operas” and finally to bleak simplicity of “Living” and “Alone”.

This is Martin – “Carlo” on his Tinder account – to whom Walsh’s libretto has given the recognisable texture of a banal digital double life. Aaron Monaghan first emerges from the orchestra pit, as though forcibly ejected, with his violin in hand; a recently single, sloppy musician, stalked by unanswered voicemails and intrusive iPhone ads (“Opt out STOP”), which conspire with the agitated tones of Dennehy’s overture to form a harrying maelstrom.

The doubling continues, though: soon an opera swells around Martin, making him an aghast spectator to the tensions of a married couple, the miserabilist Matthew (Benedict Nelson) and the suffocated Amy (Sharon Carty) whose suburban domesticity is unsettled by the visit of her free-spirited college friend Hannah (Máire Flavin).

As director Walsh keeps the stage vast and frenetic, the narrative conveyed across platforms by the singers, Jack Phelan’s impressive video design and David Sheppard and Helen Atkinson’s sound design, all fascinatingly well integrated. It creates a disjointed, media-saturated routine of instant alerts, enveloping nature clips (Martin’s source of zen) and violent video games, which seems unsettlingly familiar. If we already live life at this unbearable pitch, why can’t we be propelled into a contemporary opera?

Dennehy and Walsh both take a cue from Carlo Gesualdo, Martin’s favourite composer, whose Renaissance compositions made bold strides with unconventional tonality, and whose mind was, to put it mildly, in roiling disorder: he murdered his wife and her lover. As the distance between the opera and its frazzled watcher shrinks, it’s worth recalling Margaret Atwood’s insight: “Men are afraid that women will laugh at them. Women are afraid that men will kill them.” Next to Woyzeck in Winter and Crestfall, this completes the performance preoccupation of this year’s Galway International Arts Festival.

Walsh’s dramas have always mingled the mundane and the extraordinary, and opera accommodates his wry observations while expanding the space for his worried imagination. When a chorus appears to construe passion in destructive terms – “And love it bleed in the dirt” – it bolsters the idea that violence is our second nature. (Phelan design makes a sly, prefiguring joke when Martin misspells “violinist” as “violen–” before backtracking.) For an unconventional artist, though, that also leaves the troublesome archetypes of male aggressor and female victim undisturbed.

That’s why, as thrilling as Monaghan’s performance is – physical and almost wordless, poised on the edge of a dance – it’s as exciting to see the vigour of the orchestra pit, particularly in the string section. There the violinists play nimbly, frantically and, refreshingly, with visible pleasure. Like the tormented Martin, or Gesualdo, Crash Ensemble are also subsumed into art; but from the pit, at least, it looks like fun.