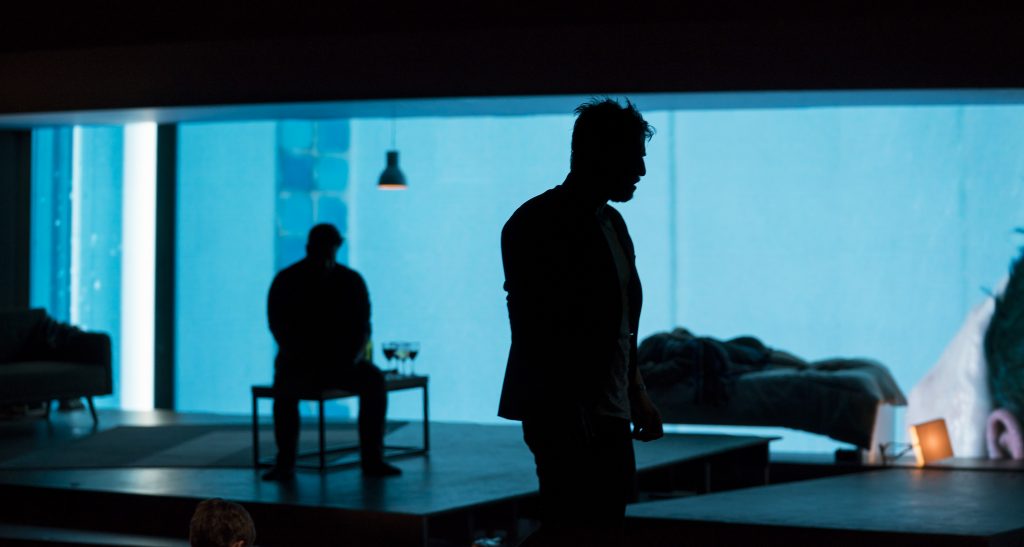 If not strictly required, knowing something of the life and music of Renaissance composer, Carlo Gesualdo, most certainly helps deepen an appreciation of Enda Walsh and Donnacha Dennehy’s scintillating opera, “The Second Violinist.” An intriguing figure, Gesualdo, both musically and personally, was psychological complex to say the least. Murdering his wife and her lover upon discovering their affair, Gesualdo also showed a penchant for extreme masochism in later life. Musically, his madrigals, for which he is best known, show a sophistication with modulation, dissonance, and tonality years ahead of their time. All of which come into play in “The Second Violinist,” a richly complex, psychological opera where the details of the everyday mingle with a thriller like tale, one concealing dark, disturbing possibilities in an opera that manages to dazzle even when it says nothing at all.

Produced by Landmark Productions and Wide Open Opera, “The Second Violinist,” sees the space between then and now, between the imagined and the remembered, become an unstable psychological domain where what’s real and unreal inhabit a liminal purgatory of the mind. Martin, alone and unloved, discovers breaking up is most certainly hard to do, especially when everybody’s talking about him. Having lost his musical touch, along with his ex-lover, Martin’s days are spent bumping around phone calls, messages, and social media, trying to find a place to land, to hang on to, or even enough of himself to craft a reinvention. When Scarlett reaches out online, it might just be possible. Unless it’s already too late. For Martin’s mind is obsessed with an opera he wants to compose, or is it a memory he wants to forget, of a man who kills his unfaithful wife and her lover. As Martin struggles to separate fact from fiction, history from now, himself from Gesualdo, love might end up causing yet another death. Or maybe the possibility of love, and music, might hold out a chance to resurrect a soul.

A drama within a drama, “The Second Violinist” opens a Pandora’s box of themes including love, jealousy and betrayal; the mind’s ability to distinguish what’s real and what’s not; and the artist as genius, loser, lover, and fool. Enda Walsh’s direction, along with Jamie Vartan’s exceptional set design, wonderfully conveys the erratic, multi-layered, instability of an artist’s mind set adrift, with something always happening everywhere, both where you look and off on the periphery of vision.  Jack Phelan’s video design is equally impressive, grounding “The Second Violinist” firmly in the gameplay, text messaging, emoji, voicemail world of the twenty first century, making it instantly recognisable and relatable, whilst also conjuring a multi-layered, unstable universe. A disturbing, easy, haunting place that Aaron Monaghan inhabits without uttering a syllable. Indeed Monaghan’s Martin, is compellingly realized in a riveting physical performance. Sharon Carty as the conflicted wife Amy, Márie Flavin as her free spirited, former college lover Hannah, and Benedict Nelson as the murderous husband Matthew, are each superb. Singing from Carty, Flavin, and Nelson is also superb throughout, as are the Chorus of Wide Open Opera. Donnacha Dennehy’s extraordinary score contrasts an almost cinematic cohesion with a constant, dissonant unraveling, always trying to reform itself only to unravel yet again, beautifully performed by Crash Ensemble, and exquisitely conducted by Ryan McAdam.