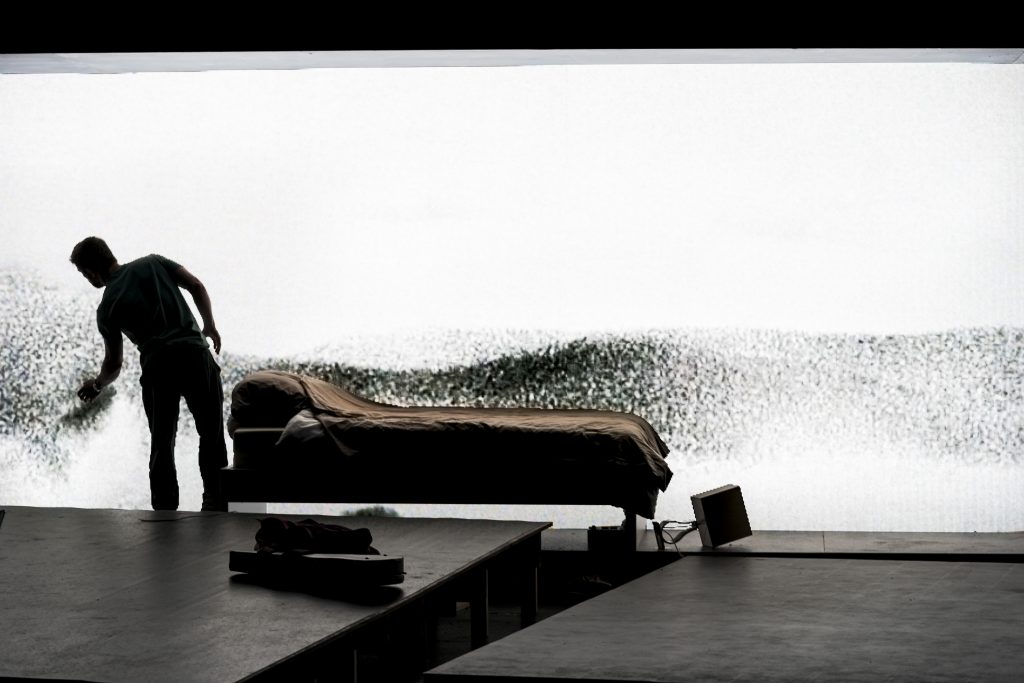 Playwright Walsh and composer Donnacha Dennehy’s exhilarating blend of opera, theatre and film is a study in heartbreak with a hint of Bluebeard’s Castle.

Playwright Enda Walsh and composer Donnacha Dennehy follow up their first opera, The Last Hotel, with a multi-layered fusion of film, theatre and opera – a collaboration between Landmark Productions and Wide Open Opera, directed by Walsh to thrilling effect. The second violinist is Martin, whose life is falling apart: he won’t practise, and spends his evenings drinking and playing violent video games. In an initially comic prologue, he hides from a bombardment of voice and text messages, while reluctantly travelling to rehearsals. Aaron Monaghan is compelling in this silent role, his whole body expressing pent-up frustration. His words are conveyed by text on a 13-metre screen behind him, until three singers invade his living room, enacting emotional scenes whose significance gradually emerges.

Dennehy’s dense composition, performed by Crash Ensemble, becomes an enveloping film score, with less than half of the 80-minute performance being sung. Incorporating a range of amplified sounds and overtones, it brilliantly uses percussion and staccato strings to build a sense of pressure and tension. Filmed images drive the drama, matched by ethereal vocalisation for the three soloists, Sharon Carty, Máire Flavin and Benedict Nelson, and an onstage chorus of 16 singers.

As often with Walsh, past and present are overlaid, and characters are split into their former, present and future selves. The disintegration of Martin’s marriage is dramatised through a series of moving arias, with his wife Amy (Sharon Carty) ruefully asking where her youth has gone. From a recognisable experience of heartbreak, Martin moves into a bleaker state of mind. Standing naked in a shower, he scrubs so intensely he might scrape away his epidermis. Monaghan’s performance is a study in pain and vulnerability.

An extraordinary sense of yearning permeates it all: the leitmotif is a meditation on love; love seeping away, or being transformed into something violent and implacable. When Jamie Vartan’s vast set opens up to reveal a forest, lit in silhouette by Adam Silverman, its bare tree trunks form an eerie colonnade. A dark fairytale is suggested, with more than a hint of Bluebeard’s Castle, while Martin seeks solace in the music of Renaissance composer Carlo Gesualdo, whose life story is anything but consolatory.

From the exhilarating score, lyrical singing, and dazzlingly intricate design, this is a work that needs to be seen more than once in order to absorb the rich detail. Like its recurring filmed image of a murmuration of starlings, it soars.